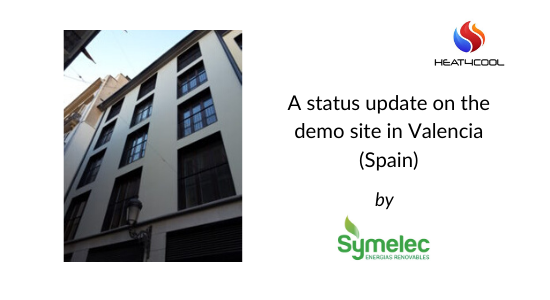 Name of the interviewee, company:  Symelec

Presentation of the demo:

Status before the Heat4Cool project:

Before the Heat4Cool actions, the previous central thermal system in the demo consisted of three air-water heat pumps that supplied two different heat and cold-water tanks. At the same time those tanks supplied DHW system, as well as air-conditioning fan coils units located in the different apartments of the building.

Progress made with the Heat4Cool project:

The Valencia pilot site and its innovative adsorption heat pump systems assisted by solar-thermal installation, is based on new technological components which are already technologically developed, but their use is still not widely spread due to different barriers.

The main purpose of the further work in this pilot site is to provide necessary on-site training gathering all the know-how learnt during the design and dimensioning processes for the adsorption system proposed at the Heat4Cool project.

The adsorption heat pump is driven by thermal energy supplied via the hot water circuit (drive circuit). The units with silica gel coating, as the one installed in Valencia, are capable to make use of low-grade heat at a temperature above 55°C. The cooling effect is distributed via the cold water circuit at a temperature range 8°C-20°C. The heat from the other two circuits (heat from the object being cooled and heat for driving the adsorption process) is removed via the re-cooling circuit and dissipated into the environment in a dedicated dry cooler. The adsorption heat pumps are an energy-efficient alternative to compression chillers. Circulation pumps, valves and controller are the only components of the adsorption unit, which are driven by electrical energy and their power consumption is just a small fraction of a traditional compressor’s power input. The power consumption of the adsorption heat pump installed in Valencia reaches a maximum of 0.8 kW for a cooling power of 16.7 kW.

Three hydraulic input / output circuits are accessed by the pump. One of them comes from the heat circuit (heat-tank), the other from the cold-water circuit and the third corresponds to the cooling circuit.

The adsorption unit operation is assisted by a solar thermal installation carried out on a building existing roof (in its South-East skirt). A solar-thermal installation of 48.5 m2 consisting of 20 flat solar collectors of 2.31 m2 each one was erected. This system was developed and projected under architectural integration criteria.

The solar system will contribute to cover a large part of  the DHW and heating demands during winter season. The solar energy production could be excessive, mainly during summer due to the low heat demand (just ACS) with an excess of production that should be dissipated. However, this heat will be used for the production of cold water by the adsorption unit.

To reduce the energy consumption of the building, a SCI-BEMS system has been designed and integrated with suitable equipment. SCI-BEMS System detects necessary environmental conditions within the area, captures set-points of the thermostats, controls total energy consumption and user’s occupation patterns extracted by reading sensors and provides ad-hoc remote control over specific loads (HVAC, DHW…).

The main goal of Valencia’s demo site is to demonstrate the energy and economic feasibility of the integrated system in order to exploit the results and provide visibility to the technologies applied through a case study which is able to achieve the forecasted energy efficiency target in terms of energy and economic savings as well as to have a positive environmental impact.

The final objective of this building retrofitting is to generate energy savings in heating, cooling and domestic hot water of approx. 30% compared to pre-retrofitting, through renewable generation sources such as thermal solar energy with a less that ten years payback period.

Some pictures from the demo site:

This site uses cookies. By continuing to browse the site, you are agreeing to our use of cookies.

We may request cookies to be set on your device. We use cookies to let us know when you visit our websites, how you interact with us, to enrich your user experience, and to customize your relationship with our website.

Click on the different category headings to find out more. You can also change some of your preferences. Note that blocking some types of cookies may impact your experience on our websites and the services we are able to offer.

These cookies are strictly necessary to provide you with services available through our website and to use some of its features.

Because these cookies are strictly necessary to deliver the website, refuseing them will have impact how our site functions. You always can block or delete cookies by changing your browser settings and force blocking all cookies on this website. But this will always prompt you to accept/refuse cookies when revisiting our site.

We fully respect if you want to refuse cookies but to avoid asking you again and again kindly allow us to store a cookie for that. You are free to opt out any time or opt in for other cookies to get a better experience. If you refuse cookies we will remove all set cookies in our domain.

We provide you with a list of stored cookies on your computer in our domain so you can check what we stored. Due to security reasons we are not able to show or modify cookies from other domains. You can check these in your browser security settings.

We also use different external services like Google Webfonts, Google Maps, and external Video providers. Since these providers may collect personal data like your IP address we allow you to block them here. Please be aware that this might heavily reduce the functionality and appearance of our site. Changes will take effect once you reload the page.